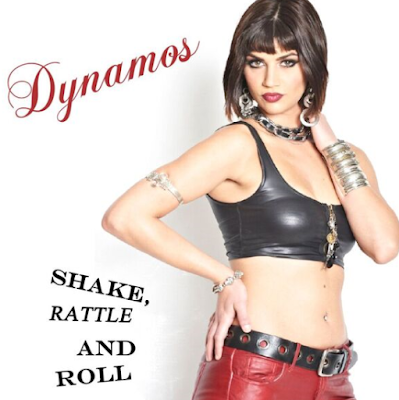 
The new single release “Shake, Rattle, & Roll” from Los Angeles headquartered five piece Dynamos places the young band among the forefront of modern rock acts and hints at rich ground they have only begun to harvest. There’s a wry form of homage to their influences laced through this song, never loudly announced, and the production and arrangement alike are geared in such a way that they highlight the track’s abundant strengths without ever sounding gimmicky. Lead singer Nadia Elmistikawy is, obviously, put out front as the band’s ascendant star, but the band are equally talented in their own way and the seamlessness of the presentation makes for a powerful package. Dynamos capture listeners’ attention with a wallop of attitude and a dollop of blues to make this even more convincing. “Shake, Rattle, and Roll” will blow away anyone who hasn’t yet heard this band with their conviction and kick in the doors attitude and remind any existing fans that this is the sort of rock act we need going into the future.


Elmistikawy’s upbringing in New Jersey included opera training as a young girl and later musical education that’s helped shape her technique into something expressive and technically accomplished. There’s definitely a strong blues sound that comes from her voice, but its blues in the best sense that all rock singers embody and she takes over the song with a strong attitude to go along with her considerable chops. Her voice seems to focus on the rhythm section as a reference point, but there’s nothing she does that fails to match the song’s guitar driven intensity and complement the six string heroics. A shallow listen to the song might mean you lose the nuance of Elmistikawy’s phrasing, but she’s undoubtedly a dramatic interpreter of the band’s material who never passes up a chance to elevate the lyrics through her attention to vocal detail.


The musicians involved in this release have, presumably, not been playing together for that long, but nevertheless demonstrates the sort of fiery chemistry we more often associate with bands that have been playing together for quite some time. They opt for the customary two guitar approach, one lead and the other rhythm, common to most rock bands and it gives Dynamos a full, rich sound further deepened by outstanding rhythm section play and a mix that underlines the physicality of the song’s musicianship. They have hit a grand slam with the song “Shake, Rattle, and Roll” that goes far beyond what we commonly hear from modern rock acts and it’s clear that Dynamos have a clear creative vision for what makes them who they are and where they want to take their music. There’s confidence coming out of every passage in this song and the assurance they project stands as a harbinger for even brighter greatness to come.