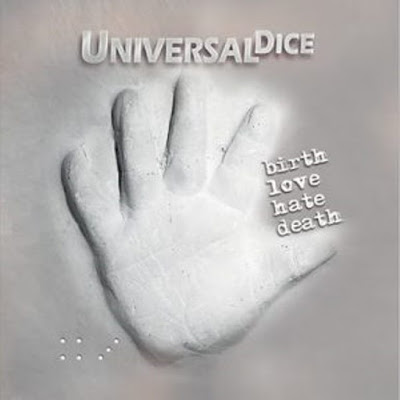 
birth, love, hate, death from Universal Dice marks the band’s fourth studio release and definitely their highest reaching effort yet. Lead singer and chief songwriter Gerry Dantone has aspirations going far beyond your typical retro minded rock release. Dantone certainly draws from a recognizable array of influences to make this release fly, longtime rock fans will surely be comforted by his mastery of the style, but the sixteen songs on Universal Dice’s fourth album are definitely modern confections with vibrant and warm sound that doesn’t recall times of yore. There’s a great mix of songwriting and instrumental prowess making this release go and it reaches some truly impressive high points along the way.

Gerry Dantone’s vocals are traditionally beautiful or musical, but he has an astonishingly engaging emotive sound that’s turned to excellent use on a number of cuts. birth, love, hate, death might initially seem overlong at sixteen songs, but it never really flags and keeps you listening throughout.
It starts off with a pleasing amount of energy and urgency. “Welcome to the World” brings listeners right into Universal Dice’s imaginative world on the steady shoulders of breezy, confident drumming and well aimed guitars. There’s a much more emotive side brought out with the album’s first ballad styled number, “I Wish I Could Tell You This”, thanks to the lead guitar and a patient, slowly unfolding musical arrangement that nevertheless makes no added demands on listener’s patience. “Your Son” shows off another appealing side of the band’s musical personality with its mix of acoustic and electrified instruments in such a way that they make use of great dynamics and create significant “drama”.

Dantone’s vocals are strong on every cut and he shows a penchant early on for varying his delivery as the song demands while still promoting himself with a recognizable style. He never feels like the focus, but he’s likewise never far from the heart of each song.That changes some on tunes like “The Prophet” where instrumental excellence is much more pronounced. The drumming on birth, love, hate, death is uniformly awesome, but “The Prophet” is one of those high points on the album where it really stands out from the pack. “Danielle” and the later “I Know What I’m Doin’” is a case study in contrast.  The former tune is an effervescent musical ride, relaxing yet containing some serious undercurrent, while “I Know What I’m Doin’” communicates low key menace in a way nothing else on birth, love, hate, death matches. “I’m No Good for You” is another especially hard hitting rock number, but Universal Dice leavens its effects some with acoustic guitar. The final two tracks “One Day at a Time” and “Forever” ends the album on an acoustic, salutatory note without ever slipping into hamminess and pretension.

This is one of the more impressive, clearly thought out releases from 2017 and it’s difficult to imagine much in this new year vying for the same mantle in the same style.
CD BABY: https://store.cdbaby.com/cd/universaldice