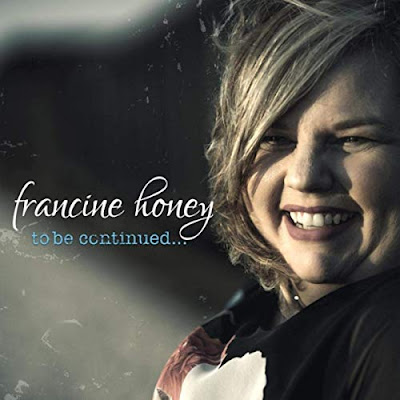 Ontario’s Francine Honey has released a new album, her third, entitled To Be Continued and the eleven songs are among the best yet she’s committed to a recording. The album hangs together in a way few extended releases down in the modern era and she clearly placed much thought into the track listing; the dramatic flow of the album makes a lot of sense and peaks at just the right points. The songs rely on traditional instruments rather than stirring the pot with exotic sounds, but the arrangements are uniformly intelligent and reach emotional heights without ever straining to make an impact.

“Snowflakes on My Eyelashes” has light reverb on its electric guitar work that contrasts well against the slowly evolving violin. Another part of the song that will stand out here and elsewhere throughout To Be Continued… is its drumming; there isn’t a single wasted beat throughout the song and even the climatic moments refrain from rushing the tempo unnecessarily. “Stay” is one of the album’s most straight ahead love songs and has a mix of soulful wailing guitar and longing well in tune for an album full of first rate material. The slight barroom tint from the track’s piano never goes too far; another defining musical characteristic of the release is how well Honey uses piano on many tracks.

The title song is another example of the piano being turned to good use. It never exerts an omnipresent sound in the mix but, instead, helps accentuate the lyric’s dramatic qualities. Honey digs deep into the words, a look back on youth from the vantage point of many years later, and they avoid any sentimentality that might otherwise drag the tune down. She shows her penchant for sharp characterizations with the track “Honey” and the sultry physicality of the arrangement helps give further life to the track. Honey’s vocal is among the album’s best and she has obvious fun drawing a picture for listeners.

“Shacked-Up Sweetie” is a glorious blast of honky tonk with gritty snap in the guitar work and an appealing bluesy yet commercial sound. Some singers in this style might overdo the vocal for a song like this, believing the audience expects a female singer to belt this type of track out in dramatic fashion, but Honey’s vocal hangs back and focuses on getting the lyric over with listeners while also blending well with the band. The video released with this song, a single release as well, complements the track very nicely without ever trying to obscure its impact. It’s filmed with great professionalism and excellent composition; moreover, it never relies too much on the histrionics common to songs and videos of this type.

One of my favorite moments arrives with the song “Space”. It’s another of the beautifully rendered musical landscapes included on To Be Continued… but, likewise, shows how Honey’s songwriting often reaches far beyond the self-imposed limits of much in modern songwriting. It’s another song about relationships, in this case the aftermath of one, but has an unique point of view in the way it details the narrator’s need for time to heal and reconsider things. The acoustic guitar and piano driven duet of “Marilyn” musically sustains a well written tribute to the affect a long dead movie star exerted over a young girl and woman. The dialogue between those aforementioned instruments is well represented in the mix and Honey’s voice underlines the ghostly quality of the song. It’s one of the most memorable entries on an album that seems destined to stand the test of time; Francine Honey’s To Be Considered… definitely deserves consideration as a fully realized work illustrating her growing maturity as an artist and entertainer.